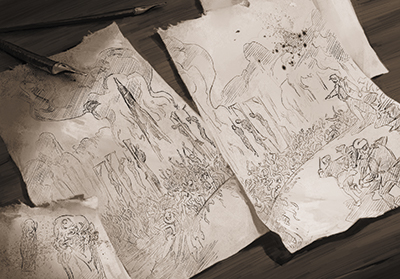 The core “setting” for many Call of Cthulhu games is the “Roaring 1920s”, with adventures set in the United States during the Prohibition-era when bootleggers and flappers enjoyed the post WWI prosperity, as well as elsewhere, like England, Egypt, Sweden, Poland, and Australia. Indeed, some epic adventures take games across the 1920s world with visits to many countries. While Chaosium publishes Call of Cthulhu books in the English language, our partners in other countries produce translated and original adventures too, with great scenarios set in Sweden, Poland, France, Spain, and many more.

The 1930s is also another great setting for games, taking place after the hedonism of the 1920s when the world suffers from the effects of the Great Depression following the big stock market crash of 1929. This is an era of adventure, scientific advancement, and peril as WWII looms on the horizon.

The great thing about Call of Cthulhu is that games can take place in just about every possible era. The Keeper Rulebook and Investigator Handbook not only detail the 1920s but also provide support for setting games in the modern-day too. What’s more, the era of the Wild West has it own setting called Down Darker Trails, and the fog-shrouded streets of Victorian-era England are also covered by Cthulhu by Gaslight. From the Regency era through to the modern-day, Call of Cthulhu has a wealth of support for many different eras of play.