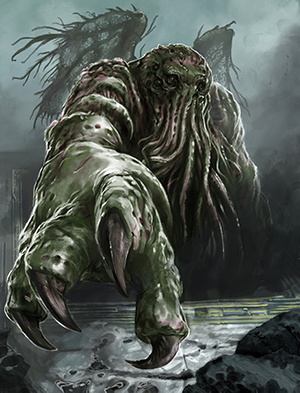 The term "Cthulhu Mythos" is generally attributed to August Derleth, a writer and early fan of Lovecraft, who later founded Arkham House publishers, dedicated to keeping in print the collected works of Lovecraft. Today, the term embodies a fictional cosmology of alien gods and monsters, arcane lore, and themes that represent “Cosmic Horror,” where humanity’s existence is unimportant in the grand scale of the universe.

While humanity might crave both comfort and the truth, only one or the other is possible on the cosmic scale of the Cthulhu Mythos. Faced with alien god-like beings, the human mind is an inflexible container and cannot fully contain the cosmic truth.

The alien entities of the Cthulhu Mythos are remote to humanity, who frequently view them as god-like beings and create cults to worship them. Such cults act in opposition to the investigators in the game.

In the game, humans desperate for power may choose to forgo all remnants of “sanity” in exchange for becoming adept at manipulating the secrets of time and space. Their devil’s bargains made, these merciless sorcerers can then bring devastation and doom to this world in exchange for more knowledge and power. Such people are the cultists that the player-investigators in the game seek to challenge and stop. Thus, the role of investigators is to uncover the dire plots of cultists and put an end to them before others get hurt.

# A Cthulhu Mythos Who’s Who

The Cthulhu Mythos is unknowable to humanity. What scraps of information are known are drawn from rare and fragmentary texts, conversations with wizards and witches, and from life-altering exposure.

According to such lore, the universe is ruled by beings variously known as the Elder Gods and Outer Gods.

Only a few of these deities are known by name. They are all extremely powerful alien beings and some may be of extra-cosmic origin.

The Outer Gods rule the universe and have little to do with humanity. Some may personify cosmic principles like time and matter. Only a few of these deities seem to take an interest in human affairs or even acknowledge the existence of the human race. When they do, they often are shown trying to break through cosmic walls or dimensions in order to wreak destruction. The Outer Gods are represented, to some extent by their messenger and soul, Nyarlathotep. When the Outer Gods are discomforted, Nyarlathotep investigates. Azathoth, a mindless abomination at the center of the universe, sleeps to the piping of a demon flute players. Yog-Sothoth is coterminous with all time and space, but locked somehow outside the mundane universe. Such beings are very powerful and, should they be summoned, they bring destruction and horror to all they encounter.

The Great Old Ones are not as powerful as the Outer Gods, but are nonetheless god-like and terrible to human senses. Humans are much more likely to worship Great Old Ones, who are comparatively near at hand and who occasionally participate in human affairs or contact individual humans. Human cults usually secretly worship a particular Great Old One. Such beings are immensely powerful entities with supernatural-seeming abilities, but many appear to be temporarily imprisoned in some way. It is said that “when the stars are right” the Great Old Ones will plunge from world to world, bringing madness and death in their wake. When the stars are not right, they cannot “live”- meaning that they are dead but sleeping, but will one day reawake.

Cthulhu is a Great Old One. With the rest of his race, he sleeps in a vast tomb at the bottom of the Pacific Ocean. Cthulhu seems to be the most important Great Old One on Earth. Others of differing forms exist and they are recorded as being both less powerful but freer. All those known on Earth are invoked or worshiped by human cults bent on releasing their “masters” and thereby obtaining great power.

Particular alien species are often associated with particular Great Old Ones or Outer Gods—such as the Deep Ones with Cthulhu, and Hunting Horrors with Nyarlathotep. These are servitor species, who act to carry out their god’s will, acting as assassins, messengers, and spies.

The independent alien races vary in power and some are intimately connected with our planet, raising great civilizations before the advent of humanity, such as the Great Race of Yith. Their ancient cities lie beneath the Antarctic and the deep sea, or else below the ground in forgotten places, waiting for the unwary to explore and uncover the horrors within. Others, like the Mi-Go, come from outer space to Earth to conduct cruel and bizarre experiments, and also to mine for precious minerals they can get nowhere else.

When a human allows and welcomes the “voices” of Mythos entities into their mind, the channel is open to receive an ongoing stream of cosmic thought, twisting perceptions while empowering them through knowledge that they can bring to bear upon their fellows and the world around them. Ultimately, for most, this can be described as power—power over others, power over life, and power over death. Mythos knowledge burns brightly and is a fire of desire, something to be lit and nurtured. Yet, it is a fire of contagion also, spreading and infecting, and ultimately burning out the human center till nothing human remains. This is the terrible path of cultists who worship these alien beings.