# What is Call of Cthulhu 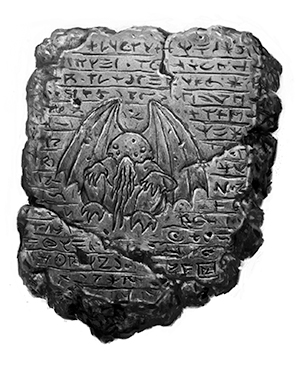 Call of Cthulhu is a game about secrets, mysteries, and horror. Playing the role of steadfast investigators, teams of characters travel to strange and dangerous places, uncover foul plots, and stand against the terrors of the night. On the way, they will encounter sanity-blasting entities from beyond space and time, hideous monsters, and insane cultists. Within strange and forgotten tomes of lore they will discover secrets that humanity was not meant to know. These ordinary people will face many challenges, but their heroic stand may very well decide the fate of the world.

Created by Sandy Petersen, and first published in 1981, Call of Cthulhu has for over forty years defined the genre and is consistently regarded as being one of the best games available to play. For those brave enough to uncover its secrets, the rewards are beyond comprehension!

In the game, each player takes on the role of a character, while one player is the referee—the Keeper of Arcane Lore (“Keeper”) who moderates the game and presents the plot and setting to the other players. Using dice and the rules of the game, you determine the success and failure of the characters’ actions, while they are propelled into dramatic and dangerous situations.

This wiki gives you all the information you will need to create a character for the Call of Cthulhu roleplaying game, as well as the basic rules of the game— enough for you and your friends to play the scenarios in the Call of Cthulhu Starter Set (opens new window)

In each game, players take on one of two roles: either an investigator or the Keeper. Most take the part of investigators (as that’s exactly what they do) attempting to solve a mystery or to resolve some dire situation. The plots encountered are designed to challenge these investigators, who may become injured, suffer sanity-shattering experiences, or even be eaten by a monster! As the game progresses, investigators can learn about strange magic and horrendous alien monsters, gain special knowledge from arcane books of forgotten lore, and advance in their skills as they become more experienced and adept.

One player takes on the role of the Keeper. They choose a scenario to play or may create one of their own devising. In the game, the Keeper sets the stage, describes the scenes, and portrays the people whom the investigators meet (called “Non-Player Characters” or NPCs). The Keeper also helps resolve the action and referees the game’s rules. Since the Keeper must make extra preparation, players often rotate the duty of Keeper between different scenarios. Think of the Keeper’s role like that of a director making a movie in which the actors (the investigators) don’t know how the story will develop.

The game is an evolving interaction between players—in the guise of their characters unraveling a mystery—and the Keeper, who presents and adjudicates the world in which the mystery occurs.

There is no board to play on. Play is mostly talking: a situation is presented and outlined by the Keeper, and then the players say what they, as their investigators, intend to do. Using the rules to keep matters consistent and fair, the Keeper tells them if they can do what they proposed and the steps they must follow, which often means rolling some dice to determine success. Dice help to resolve encounters and situations and keep everybody honest, as well as adding drama and suspense—the outcome of a roll could mean an unforeseen surprise, a dismal defeat, or a hair’s breadth escape from death! Once an outcome is determined, the Keeper narrates what happens, asking the players for their reactions, and so on.

The purpose of roleplaying is to have fun. Right down to pounding hearts and sweating brows, it’s part of human nature to find pleasure in being scared, as long as that being scared is not for real. For some, the relaxation after the scare is the most important result. For others, it is the scare itself. Call of Cthulhu is a vehicle for alternately scaring and then reassuring players. Enjoyable fun for all concerned!

# Concepts of the Game

Call of Cthulhu takes its premise from the stories of an early 20th century writer called Howard Phillips Lovecraft (August 20, 1890–March 15, 1937), whose stories centered on a dark philosophy of an uncaring cosmos in which, unbeknown to humanity, strange alien and god-like beings rule. These concepts were popular enough to inspire generations of writers, who would go on to develop and expand what is known as “Cosmic Horror” within the structures created by Lovecraft (the “Cthulhu Mythos”).

Lovecraft was virtually unknown and published only in pulp magazines before he died in poverty, but he is now regarded as one of the most significant 20th century authors in the horror and weird fiction genres. In spite of Lovecraft’s distasteful racism and outdated personal views, we can find inspiration for gaming in his fictional creations. Lovecraft’s writing is somewhat dense and uses archaic language, which seems to unwind like pages from one of those ancient books of magic he often describes in his tales. As well as engaging with the horror, we also can find pleasure in lampooning his ideas and motifs, for Lovecraft laughed about himself and wrote stories that satirized his friends all the time. Contemporary writers of fiction and game materials have moved beyond Lovecraft in exploring the Cthulhu Mythos and re-examining contemporary and historical social themes. The Call of Cthulhu game takes inspiration from the pulp fiction stories of the early 20th century as well as modern reinterpretations and expansions of the Cthulhu Mythos. Unlike Lovecraft, the game embraces a diversity of voices.

If you would like to read more in-depth articles on H. P. Lovecraft and the Cthulhu Mythos there is plenty to find on the internet, with Wikipedia being a great place to start.

Adventures in Call of Cthulhu usually center on a mystery, with the investigators called in to help uncover the truth of the situation. Often the mystery has been caused by the criminal wrongdoings of a crazed worshipper or a cult in the service of the gods of the Cthulhu Mythos. The investigators’ job is to find clues, with each clue bringing to light another avenue for research or exploration. As the investigators gather clues, their knowledge of the situations grows until they identify the person or cause of the original wrongdoing, which in turn may lead to some form of final confrontation or challenge. It is the players’ job, in the guise of their investigators, to unravel the mystery and decide upon a way to resolve the situation and ensure those responsible are brought to justice or dealt with. Sometimes, the mystery may be the result of strange magics, a hideous monster, or other bizarre event, each of which can adversely affect the investigators.

Of course, not all adventures are the same and some do not take the form of a mystery. Sometimes a scenario simply drops the investigators into a dangerous situation from which they must escape or find a resolution. Each adventure is like a short story, and all are different. Scenarios can be linked together, with each story forming a strand in a larger more encompassing plot—these are called campaigns.