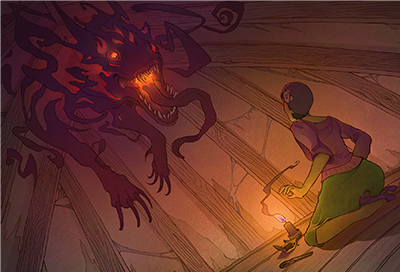 Think of the game mechanic of Sanity (abbreviated as 'SAN') as modeling the behavior of characters in horror fiction when confronted with incomprehensible physics and monstrous entities from beyond space and time. The cosmic horrors of the Cthulhu Mythos defy safe or easy comprehension. When faced with such terrors, the human mind attempts to rationalize them but may become corrupted by the experience. The loss of SAN points is the cost associated with gaining new but terrible knowledge of the Cthulhu Mythos. In this sense, SAN is a corruption of human behavior, morals, and personality. Thus, "Sanity" is the game’s register of the investigator’s mental resilience. It is not designed to model or make light of real-world mental health conditions, in the same way that hit points (and the loss of them) in most RPGs do not make light of real-world physical trauma and injury.

When you fail a “Sanity roll” the Keeper gets to momentarily control your next action as the fear takes hold of you; perhaps you unwittingly scream or squeeze the trigger of your gun.

If an investigator loses 5 or more Sanity points as the consequence of a single Sanity roll, they have suffered major emotional trauma. The player must roll 1D100. If the result is equal to or less than their Intelligence (INT), the investigator fully understands and comprehends what has been seen and goes temporarily insane (for 1D10 hours). If they fail the roll, their mind is closed to the horror and they remain sane (for now).

If your investigator is temporarily insane, the Keeper may decide to add a phobia or mania to your sheet (such as “fear of the dark,” “fear of confined spaces,” or “kleptomania, an irrational compulsion to steal things”). Alternatively, they may decide to rewrite one of your existing backstory entries, perhaps corrupting it in some way (where you wrote “Trusting” under Traits, the Keeper corrupts this to “Fearful.”)

While temporarily insane, the Keeper may present your investigator with “Delusions” (hallucinations)—is that a zombie creeping up on you or is it just a homeless man asking for spare change? You can only be certain by asking to make a “reality check”—electing to make a Sanity roll; if you’re successful, you see through the hallucination, but if you fail, you fall deeper into the madness!

Once 1D10 hours have passed, the investigator is sane once more and cannot be affected by more delusions; however, altered backstories or phobias or manias gained while insane remain in effect.

There are hundreds of possible phobias and manias. Here are just a few possibilities.

Involuntary action: any Sanity points loss results in a momentary involuntary action, determined by the Keeper (such as a scream, fainting for 1 round, or pulling the trigger on a gun).

If 5 or more points are lost at any one time: ask the investigator to make an Intelligence (INT) roll: if failed, the character remains sane; if successful (they rolled equal to or lower than their INT value), they have become temporarily insane for 1D10 hours. The Keeper may apply the following as they see fit: