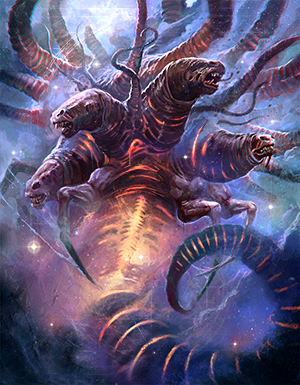 This section provides a selection of monsters, beasts, and alien beings for use within Call of Cthulhu. The chapter is divided into four sections, each focusing on a specific monster type: Cthulhu Mythos entities, Cthulhu Mythos gods, classic monsters, and beasts. The selection of monsters across the sections is not exhaustive—every horror fan can probably think of some terror not present. The ones here are those found in the most important stories, frequently appear in scenarios, or are commonly referred to.

Most monsters and entities have characteristics including STR, CON, SIZ, POW, INT, and DEX. However many do not have an APP or EDU, since these qualities are meaningless in such alien and horrific creatures. Keepers have full reign to alter, modify, and rethink these entries. Lovecraft did not codify the monsters in his stories, so neither should you if you wish to present dramatically different versions.

Along with the characteristic of SIZ, each monster, character, and vehicle has a build value. This figure provides an at a glance guide to scale. The average human has a Build of 0, with the full range extending from –2 (children and small persons) to 2 (heavyweight boxers for example). The build scale is not linear; combining 5 motorcycles would not create something larger than a truck.

Using this as a guide, it becomes simple to figure the relative capability of a monster to lift and throw things—for example, whether a monster is large enough to throw a car.

Monsters are, for the most part, not mindless animals. Many are of equal or greater intelligence than the investigators, with motivations and concerns beyond the scope of the average human’s understanding. Monsters will not automatically seek combat and, if they do, they will not necessarily seek to kill the investigators. The more intelligent monsters may take the investigators captive, either to use as slaves or sacrifices, or perhaps for experimental purposes. Not every encounter has to be a fight; hiding or fleeing may be the wisest option.

When involved in combat, consider the monster’s objective. If its aim is to kill the investigator, it should fight back rather than dodge. If it wants to escape from the investigators, it may choose to dodge in order to gain an opportunity to flee.

Many Mythos monsters can use spells, casting them as any other spell caster would. In some cases a monster’s spell may be portrayed as a manifestation of that monster’s innate power.

Monsters may not have skills listed, though most or all might have a few skills such as Listen, Stealth, or Spot Hidden. Keepers should add skills as required, using comparative beings as a guide.

Mythos gods and some Mythos monsters are multidimensional, existing in our plane of reality as well as others beyond our reasoning, and thus cannot be truly slain. While hit points are given, should such a creature as an Outer God or Great Old One be somehow reduced to 0 or negative hit points, the thing is not killed or rendered unconscious, but is dispelled or forced back from whence it came. Mere damage will not destroy or even harm these powers. If they are forced or persuaded to leave, they can return.

It is quite possible for the investigators to beat some monsters in combat. Against others, their only chance of survival is generally to flee or hide. Deep ones, byakhee, dimensional shamblers, fire vampires, ghasts, ghouls, mi-go, moon-beasts, nightgaunts, rat-things, sand-dwellers, serpent people, and of course human cultists can all be "taken on" in combat by several investigators with some hope of success. This is the reason that so many scenarios feature cultists, deep ones, mi-go, and ghouls—they make approximately human-scale adversaries. Such Mythos entities can, on first reflection, appear human-like in terms of their vulnerability and relative size; yet beware of humanizing such monsters. As stated, their goals, knowledge, and abilities should be difficult, if not impossible, to fathom. They will act in unexpected ways and the mere sight of them can draw madness down upon the inquisitive investigator.

By default, every monster (with a few exceptions), has the Fighting skill—a generic combat skill covering all manner of strikes, kicks, claws, teeth, tentacles, elbows, head butts, etc. If the being is able to use melee weapons, the Fighting skill should be used for those as well. Be creative in how you use and portray these attacks. Each entry describes how the monster would normally attack, and key words, such as bite or kick, are provided to give Keepers ideas on how best to describe differing attacks. The environment can also be added to the description of attacks and damage: an investigator could be crushed between an elephant and a tree; a ghoul could crack open an investigator’s head against a gravestone; and so on.

Maneuvers (mnvr) use the monster’s Fighting skill. Build is an important factor for maneuvers; if the opponent is 3 Build points above that of an attacker, a maneuver is ineffective. Any monster of Build 2 or greater is never going to have penalty dice when using a maneuver against a human being. The largest opponent a human (maximum Build 2) could take on with a maneuver would be Build 4 (horse, elder thing, etc.)—even then, the largest of humans would attack with 2 penalty dice due to the difference in Build.

In combat, monsters can use the same range of maneuvers open to humans. The Keeper should visualize the monster and imagine how it might take advantage of its physical form in combat. If it has tentacles, hands, or pincers, it might seize hold of its opponent. If it has a prominent mouth then it might bite and hold onto its prey. Large creatures might simply trap their opponents with their bulk, crushing the life out of them. Opponents that are seized or grabbed are held until they succeed in an opposed STR roll or maneuver of their own to free themselves.

With a successful maneuver, a monster could:

# Monsters and Fighting Back

Unless a monster is trying to escape or being especially crafty, you should respond to investigator attacks by fighting back rather than dodging. When fighting back, a monster should generally use its basic Fighting skill. A monster that has more than one attack per round may also dodge or fight back that number of times before its enemies are granted a bonus die for outnumbering it (see Outnumbered). Thus a ghoul with three attacks can fight back three times before its attackers gain a bonus die to their attacks. Some Mythos entities can never be outnumbered by investigators.

Rather than declaring that a monster or opponent is dead, the Keeper is encouraged to describe what the investigators can see—the monster has stopped moving, it appears to be melting, a thick green fluid is welling up from a hole in the side of its body, and so on. Remember that these monsters are strange and alien beings; determining death should not be simple. Some monsters (when reduced to unconsciousness or zero hit points) may appear to be dead, only to rise again moments or hours later to inflict a grisly revenge on their attackers. Only a successful First Aid or Medicine roll will determine for sure whether a being is alive or dead.

The higher a monster’s POW and INT, the more likely it is to know spells. As a guide, those with POW and INT of 50 to 100 might know 1D6 spells. In choosing spells, consider the purpose and the nature of the creature. Keepers are encouraged to manipulate and alter spells to better suit particular Mythos monsters. No casting roll is required for the initial casting of a spell by a monster. Expend magic points as required by the spell cost, but disregard any SAN costs or Sanity rolls.

Suitable spells for each monster are suggested, although others may be known if the Keeper wishes. In many cases, the Mythos monsters described here worship one or more of the Outer Gods or Great Old Ones, and it should be assumed that they would know at least one spell to contact, call, or summon their masters.

Chapter 12: Grimoire of the Keeper Rulebook (opens new window) details many suitable spells, however Keepers are encouraged to adjust spells and use the deeper magic versions; after all, these beings are not some fumbling human wizard seeking the mysteries of magic, but rather the very embodiment of the Mythos in all of its horrific splendor.