The animals listed below are those that feature as foes in stories of the horror genre (think of Hitchcock’s The Birds) or those that might be utilized by the investigators (such as horses as mounts). 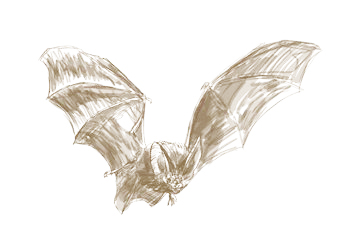 The giant fruit bat of Central America congregates in dozens or hundreds. The smaller bats common to the United States gather in enormous cavern-based flocks of up to 50,000 individuals. Bats worldwide are under severe environmental attack from humans.

If attacking as a group, use the characteristics above to represent the group, increasing the Size by 10 and damage dice size by 1 for each additional bat.

Attacks per round: 1
Fighting attacks: Attacks with teeth and claws.
Fighting attacks (Group): Each time the target beats the bats in a Fighting roll reduce the number of bats by one. Thus a group of 6 bats would have a size of 65 and would inflict 1D6 damage (since there isn’t a D7). 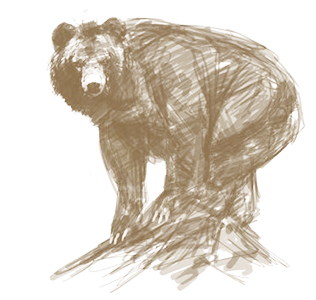 The Black bear is by far the most common type of bear in North America. It is the only bear likely to be met in the eastern United States. 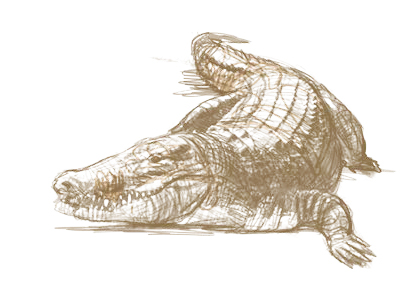 The Nile crocodile, now rare in the lower Nile but still found in central Africa, Madagascar, tropical Asia and northern and western Australia. Where there is water there may be crocodiles. Crocs eat anything they can catch and come in great numbers to a kill to feed communally. Usually they will not attack a boat. Similar stats may be used for any crocodilia, including alligators, caimans, and gavials—all long-snouted, lizard-like, and carnivorous.

Attacks per round: 1
Fighting attacks: The main danger of course is their bite, but a large one can thrash around and cause impact damage.
Bite and hold (mnvr): Vicious jaws; once they have hold they are unlikely to let go and may drag their victim underwater to drown. 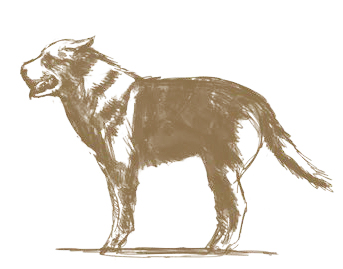 Our domestic friends are notable among animals for devotion and affection to their human masters. As hunters, they prefer to gather in packs of 1D8+3 animals minimum. Dogs come in a variety of sizes and the (average) values below should be adapted accordingly. 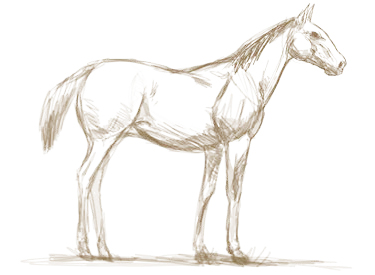 Horses offer many advantages to those who know their ways. For roleplaying, divide them into riding horses, draught horses, donkeys, and mules.

Use of the riding horse is covered by the Ride skill. Single riders and small groups can easily cover forty miles in a day, given plenty of water and fodder, such as oats and other grains. Riding horses may spar with other horses, but they do not fight unless cornered. Even cavalry-trained horses are trained merely to stay their ground and control their nervousness. Nearly all horses will panic at the presence of some supernatural thing.

Among all horses, the tendency concerning bloody events, gunfire, monsters, angry crowds and so on, will be a sensible one, to flee.

Attacks per round: 1
Fighting attacks: These are large animals that can kick and bite as well as buffet a lesser opponent to the ground. Can rise up on its hind legs then plunge down with its forelegs. A horse requires training for it to trample people.

Armor: None.
Habitat: Grasslands and high deserts, or where humans are.

Individual rats are not worthy opponents, but an infestation of rats can be daunting. Assume ten rats per pack. A successful attack by an investigator kills one or two rats and usually chases away the rest of that pack.

Attacks per round: 1
Fighting attacks: Rats attack with teeth and claws.
Overwhelm (mnvr): As a pack they may assault and overwhelm an individual using the maneuver rules, because of their numbers they gain one bonus die on the attack. Such an attack would involve swarming over the target, biting and scratching as they do so.

Armor: N/A
Habitat: Not far from where you are sitting right now.

A cloud of stinger-equipped, flying insects attacks for 2D6 combat rounds before halting pursuit. Unless the victims are completely covered (as with netting or by being enclosed in an automobile or by diving underwater), there is no protection against them. An investigator who is stung extensively and whose player fails a CON roll may experience profound immune system shock, fall seriously ill, and (rarely) die. The Africanized bees presently colonizing the Americas are more intent in their pursuit than are honey bees or wasps, attacking for up to 3D6 minutes. Being seriously stung by these so-called killer bees occasionally results in death, since the attacks are comparatively unrelenting and often more numerous. Each minute of such attack might cost as much as 1D6 hit points. 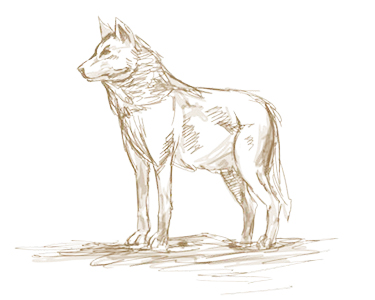 Attacks per round: 1
Fighting attacks: Teeth, claws and mauling.