One might easily imagine an alien nucleus of substance or energy, formless or otherwise, kept alive by imperceptible or immaterial subtractions from the life-force or bodily tissues and fluids of other more palpably living things into which it penetrates and with whose fabric it sometimes completely merges.

Games of Call of Cthulhu can be used to tell any kind of horror story—don’t feel restricted to using authentically Lovecraftian adversaries. Traditional horror has often relied on the duality of good versus evil, a concept which loses its meaning in Lovecraft’s nihilistic universe. Many of the supernatural beings of legend are traditionally defeated with the use of religious paraphernalia: the vampire is harmed by holy water and repelled by a crucifix; ghosts and demons are subject to exorcism by Christian priests. Why should such things work in a Lovecraftian setting? Not everything needs to be explained, but glaring inconsistencies should be addressed; if vampires are affected by a crucifix, then why aren’t ghouls?

Trying to marry the traditional horror tropes with a Lovecraftian universe might not be as easy as it sounds. It may be helpful to distinguish between games that use a Lovecraftian setting from generic horror games.

Consistency is only required where two stories are linked. You may decide to have crucifixes burn the flesh of the undead in a 1970s vampire scenario only to have such things mocked and without value in a modern-day encounter with the Mythos. If the stories are not linked (i.e. use a different set of characters) then no consistency is required.

The use of traditional monsters within games also provides Keepers with the option of inserting "red herrings" into the story or ensuring that games don’t become stale as the investigators face yet another Mythos monster, week after week. Blending traditional and Mythos monsters allows Keepers to create unique and challenging mysteries where the players may think they know what they face, only to discover some new hybrid horror that is all the more challenging and frightening. 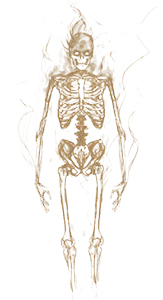 Each ghost should be crafted by the Keeper to fit the circumstances of the scenario. Ghosts generally possess only INT and POW, appearing as dim, misty forms. They haunt certain locations or specific objects (such as a book, ship, or automobile).

Ghosts may or may not be vulnerable to magic or to exorcism. Ghosts especially seem to haunt locations in order to communicate the awfulness that prompted their formation. Sometimes a ghost gives clues or instructions, which, if carried out, let the anxious shade dissolve and find peace. Though all ghosts are terrifying, some are more loathsome than others; a 1D8 Sanity point loss should be the maximum loss for seeing a ghost.

For a ghost’s attack, use an opposed POW roll. As this happens, the ghost may be glimpsed as clawing at, enveloping, or otherwise physically attacking the target. If the character fails the opposed POW roll, the character loses 2D10 POW. If the character can overcome the ghost, they cause the ghost to lose 2D10 POW. Any points of POW lost are forfeit. Ghosts of greater strength may drain 3D10 POW or more from a victim in a single combat round, but such potent entities still lose only 2D10 POW if overcome by the victim in a particular round.

It is up to the Keeper to determine how a ghost can be laid to rest. Some possibilities include:

Some ghosts can manipulate the environment around them, causing pots to fly off shelves, doors to open and telephones to ring—the infamous poltergeist. More powerful poltergeists may cause physical harm to the unwary by attacking with thrown items. In such instances, investigators should use the Dodge skill to avoid being hit and perhaps look for alternative means to calm or expel the angry spirit.

Individually crafted ghosts are good sources of spooky scenarios. Entire campaigns can be devoted to the study of and exorcism of ghosts. Books to read as sources for ideas about ghosts include The Haunting of Hill House (both the novel and the 1963 film, The Haunting) by Shirley Jackson, The Shining by Stephen King, any of William Hope Hodgson’s ghost stories (particularly the Carnacki the Ghost Finder tales), and the ghost stories of M. R. James. Henry James contributes a whole volume of ghost stories in his Collected Works and Rudyard Kipling set some excellent tales of ghosts in both England and India. 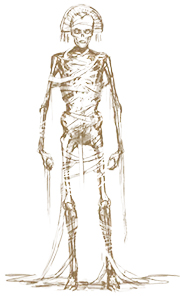 These undead beings are similar to intelligent zombies. Some cults keep mummies in their temples as guardians. Like zombies, mummies must be hacked apart to make them cease action. Contrary to popular belief, many mummies lack bandage wrappings and can move relatively swiftly. Some mummies cannot naturally regenerate magic points.

A mummy has double its human STR, 1.5 times its original CON and two-thirds of original DEX. Because of the bitumen and bandages frequently used to preserve them, fire is particularly effective against Egyptian mummies: damage is normal, however the flames are more difficult to extinguish because of the bitumen in the wrappings.

Attacks per round: 2
Fighting attacks: Mummies have the usual range of unarmed attacks open to humanoids.

Animated skeletons are encountered in a few medieval legends and rather more frequently in stories and films.

Resistant to harm: Dried bones are fairly brittle, snapping and splintering easily from a heavy blow, however no area of a skeleton is more vulnerable than any other. Any blow striking a skeleton has a chance of destroying it equal to or less than the damage done x 5 (as rolled on 1D100). For example, if an axe hit a skeleton and did 8 points damage, there would be a 40% chance of destroying the skeleton by shattering it. Unless the skeleton shatters, it remains totally undamaged. Apply one penalty die on attacks made with an impaling weapon (including bullets), since much of the target is simply air.

Attacks per round: 1
Fighting attacks: Animated skeletons traditionally use weapons rather than striking blows directly, perhaps because they shatter so easily. Equip as desired, typically a small club or sword. 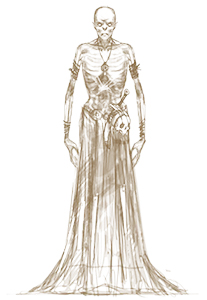 Every player will be interested in matching wits with these bloodsuckers; however stories about vampires and their powers are so conflicting and contradictory that the individual Keeper must determine which vampire facts are true in play and which are merely legendary. Here are some options:

Once physical attacks have exceeded its hit points, the vampire turns into smoke or mist at the end of the round after which its hit points reached zero, thereafter regenerating hit points at the rate of 1 point per round. If, when at zero hit points, a stake is driven through its heart the vampire is killed and reduced to ashes.

Attacks per round: 1
Fighting attacks: Vampires have the usual range of unarmed attacks open to humanoids.
Bite: Depending on the style of your vampire, the vampire may have to hold the victim to continue draining its victim’s blood, or the act of biting may subdue the victim to the vampire’s will. Either way the vampire drains 2D10 STR (blood) from the victim each round thereafter.
Gaze: If the target fails an opposed POW roll the target is hypnotized and can be made to follow simple instructions. If these instructions are self-destructive, at the start of a round the target’s player may attempt an INT roll to snap out of it. 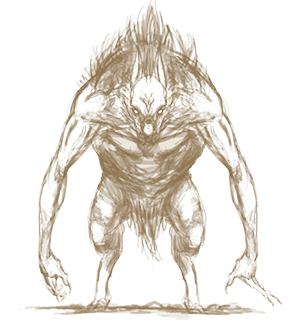 Traditionally, a normal human is cursed and occasionally thereafter turns into a monster, half-human and half-beast—classically at the full moon. This unfortunate may be unaware of the curse or may detest their fate. A second sort may fully transform into a wolf, glorying in its transformations, and has more control over the metamorphoses than the first. Ravenous and savage attacks, much like the classical mad dog or rabid human, are typical of both.

Both types of werewolf apparently propagate by transmitting a transformational agent through the saliva while biting. In some cultures a person may become a werewolf due to witchcraft; the curse in this case being a spell. While some folklore suggests that a person can enact the transformation upon themselves by ingesting certain plants and the blood of the innocent.

As humans, werewolves are outwardly normal and have normal human characteristics. The man-beast and giant wolf forms below share common attacks, armor, etc. The Keeper may or may not charge a sanity loss for the wolf form: if there is a Sanity loss, give the creature glowing eyes and other supernatural attributes to account for the perception in the mind of the character.

Regeneration: In bestial form the werewolf is notoriously resistant to injury, regenerating 1 hit point every round. Scars and welts of such damage may remain after the ravener reassumes human form. Such healing is weakening, often forcing the shape-changer to spend days in bed.

Attacks per round: 2
Fighting attacks: Biting, clawing and mauling. If target’s skin broken by a Bite, the victim transforms into a werewolf at the next full moon.

Armor: While in wolf or man-beast form, 1-point hide plus regeneration of 1 hit point per round.
Skills: Track (by smell) 90%, Stealth 60%
Sanity Loss: 0/1D8 Sanity points to see a werewolf. 0/1D3 to see one change shape.

The spell creating the zombie supplies the points of POW motivating it. Each spell-caster directs what they create: zombies, in the main, have no will of their own.

As the Keeper wishes, a few spells and substances may deactivate these things. According to voodoo tradition, zombies could be destroyed by feeding them salt; their makers would first sew shut their mouths to guard against this.

In addition to the voodoo tradition, Keepers should note the Resurrection spell within the Cthulhu Mythos tradition—a means of resurrecting the dead (which seem mostly in control of their faculties), and the new rationales that weird science, or vile pollution might also create zombie-like things.

Armor: Major wounds delivered to the body will result in loss of a limb. Otherwise ignore damage except to the head (one penalty die on rolls to target the head).
Sanity Loss: 0/1D8 Sanity points to see a zombie.